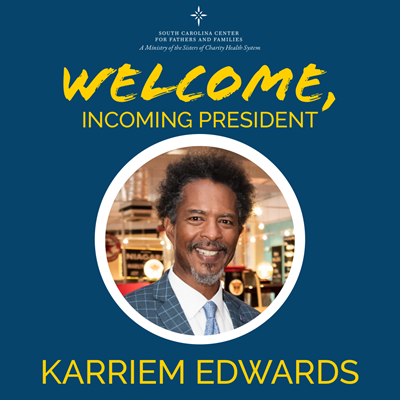 The South Carolina Center for Fathers and Families has announced Karriem Edwards as incoming president. He will take over for retiring president, Patricia Littlejohn, this summer.

“Karriem has a dynamic personality. He is a strategic thinker with a head for business and a heart for service. He’s going to bring a lot of energy to his role as he leads the Center forward,” said Tom Keith, Center board member and outgoing president of The Sisters of Charity Foundation of South Carolina. Edwards is a seasoned philanthropic leader with over 20 years of proven success in program development, training, management, and fundraising. In his current role as Vice President of Development for Boys & Girls Clubs of Broward County, his year-to-date efforts have garnered $8 million in funds raised.

Warren Bolton, Board Chair for the Center, said that as retiring president, Littlejohn will leave a lasting impact on the work of elevating fatherhood programs across the state and around the nation and that Karriem will be well-positioned to continue that work.

“Pat is truly irreplaceable,” said Bolton. “She was instrumental in the development and leadership of the Fatherhood Initiative when it began in 1997 and was an integral part of establishing the Center in 2002. Since then, the Center has evolved to touch all corners of the state and impact more than 25,000 fathers. Her retirement will undoubtedly be felt but we’re looking forward to having Karriem bring his experience, his training, and his passion to the Center and continue the work that Pat began.”

Karriem’s selection as the next Center president was the result of a months-long national search. Center Board member, Ron Harvey, chaired the search committee and said that it was an extremely competitive process.

“The search committee met with several top-tier candidates from within the state and around the country. All of the individuals we met were passionate and qualified professionals. Ultimately, the board felt that Karriem was the right candidate for the Center for this moment. He has a vision and an enthusiasm that will serve the Center well.”

Retiring President Pat Littlejohn said that she’s looking forward to the Center’s next chapter. “This is an exciting time for the Center,” said Littlejohn. “Karriem is an experienced leader in non-profit work. He will bring a wealth of experience to the position and a vibrant, new perspective to our work.” Edwards is an Akron Ohio native. He is a graduate of Florida A& M University and the Social Enterprise Institute at Harvard Business School. Karriem and his family will be relocating to Columbia, South Carolina from Fort Lauderdale, Florida. He looks forward to starting the next phase of his career in the Palmetto State.

“Fathers play a monumental role in the life of a child. I saw this firsthand in my decades of youth service as a serviceman, a coach, a counselor and in the myriad roles that I’ve held with the Boys and Girls Club. To now have this opportunity to facilitate the empowerment of, not just youth but also their fathers and their families, is truly an honor. I’m grateful to be given the chance to join this team of national leaders in fatherhood and build upon the legacy that Pat has established. Happy Father’s Day, South Carolina. Today and every day,” Karriem said.