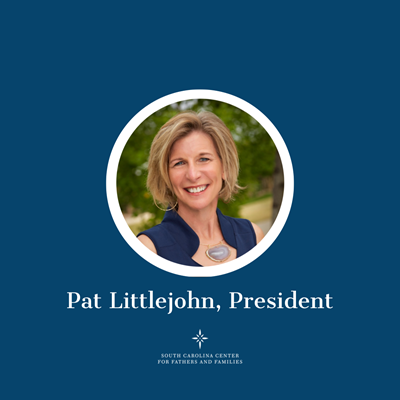 COLUMBIA, SC – Patricia Littlejohn, president of the South Carolina Center for Fathers and Families, will retire in the summer of 2022. The Center is a ministry of the Sisters of Charity Health System that works to reduce child poverty by ending father absence. Her retirement comes as the Center celebrates its 20th anniversary and commemorates serving more than 25,000 fathers across the state.

“Pat is one of the pioneers in the fatherhood field, and her work has helped make South Carolina a national leader in serving fathers,” said Tom Keith, president of the Sisters of Charity Foundation of South Carolina. “She is a servant leader with a heart for fathers and a passion for service that has been central to the Center’s success strengthening communities by helping fathers and families.”

Littlejohn has been part of the Center since its creation in a career that spans nearly 30 years of non-profit service and leadership. As a program officer for the Sisters of Charity Foundation, she was instrumental in the development of the Fatherhood Initiative when it began in 1997. She later helped establish the Center in 2002, formally becoming president in 2005.

Under Littlejohn’s leadership, the Center experienced tremendous growth and impact including:

“Pat’s commitment to supporting fathers is inspiring,” said Warren Bolton, board chair for the SC Center for Fathers and Families. “Although she is humble to a fault, it would be hard to overstate Pat’s role in promoting the importance of father engagement to the lives of children, the well-being of families, and the prosperity of our communities. The Center has been blessed to have her, and we’re going to miss her.”

The Center’s board has formed a search committee to find the next leader of the organization and provide a smooth leadership transition for the Center. A new president is expected to be named by early summer.