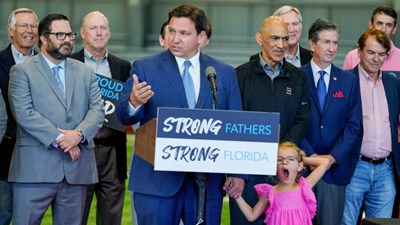 As we celebrate 20 years of strengthening fathers, we are delighted our successes helped another state launch critical fatherhood programming. On Monday, April 11, Florida’s Governor, Ron DeSantis, signed landmark legislation to provide $70 million to establish a statewide fatherhood bill. Under the bill, the state Department of Children and Families will be directed to contract for the creation of the “Responsible Fatherhood Initiative.”

“We are so very proud of Florida's leadership for taking this bold step and address the fatherhood crisis facing every state in the nation,” said Pat Littlejohn, SCCFF President. “We are also honored to be cited as one of the two states mentioned in the Florida budget analysis as a model statewide initiative.”

Florida’s initiative will be geared toward providing information on effective parenting and will include a media campaign that may showcase appearances by, and involvement from, public figures and influencers. With the number of father-absent homes now exceeding one in four across the nation, we believe programs that promote fathers’ rights, break down barriers to father engagement, and ensure children have two responsible parents are imperative. Study after study proves that father engagement is not only vital to children and families, but also to greater safety and economic vitality for all citizens. Our DadFActs page showcases the enormous benefits of father engagement and the horrendous outcomes caused by father absence.

“We pioneered state-wide coordinated fatherhood programming in 2002 and have positively impacted more than 25,000 South Carolina fathers and 56,000 South Carolina children,” Littlejohn said. “While we are proud of our work, we are also humbled by the numbers of fathers, children and families still to be helped. Father engagement needs to be on everyone’s radar. So many of today’s societal ills – from teen homelessness and suicide to the opioid crisis and burgeoning prison populations – could be significantly lessened with expanded father-centric programming.”