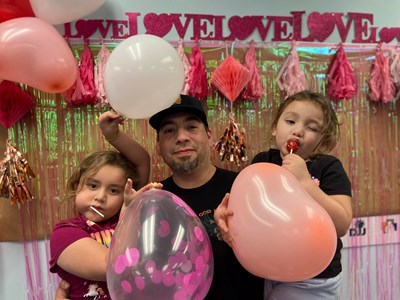 Mr. Medina came to Father to Father newly divorced and just beginning to navigate visitation with his two daughters, as well as the child support system. He was struggling with the amount he was ordered to pay in child support, which was a substantial percentage of his income. At the time, Mr. Medina was seeing his daughters regularly through his visitation order, but his time with them was never enough.

When he began at Father to Father, Mr. Medina got a part-time job at a local entertainment center so he could take his daughters there when he had them. Through attending classes with Father to Father, Mr. Medina has been able to learn the skills needed to better the relationship with his daughters’ mother. While their relationship is not perfect, Mr. Medina has been able to communicate with her more effectively and, together, they are able to make the best decisions for their daughters.

The parent-child activities hosted by Father to Father have played a big role in the quality time Mr. Medina has been able to spend with his daughters. Through his work with the program, he was also able to reduce the amount he was paying in child support to an amount that he is better equipped to pay, which allowing him to save money to ultimately better his living situation.

In addition to bettering his relationships with his daughters and their mother, Mr. Medina’s success in the program has put him in a position to create resources for his children’s future. He completed the Housing to Home Ownership program which put him in a better position to buy a home, and he continues to make progress toward this goal every day. He believes that the relationships he had developed through the program at Father to Father have helped drive him to continue to make a better life for himself and his daughters.

We applaud Mr. Medina’s hard work to improve his relationships and future!