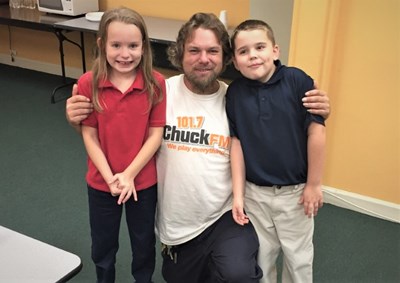 In South Carolina, if a father is not married to the mother of his children and his name is not on the birth certificate, he has no custodial rights. Essentially, the mother decides what the relationship will be between the children and their father.

At the time of his enrollment at Father to Father, Inc., Timothy Leary was in a relationship with the mother of his twins and saw them regularly. He initially came to the fatherhood organization seeking help with a path to better employment. Not long after joining the program, the couple’s relationship began to disintegrate, and they separated. The mother then denied Leary access to his children.

Weeks passed. Leary continued attending programs, but his frustration grew and the constant worry about his kids began to affect his emotional health. He shared those feelings with his intervention specialist, Sean Wilson, who saw that Leary was tired and losing hope. Leary explained he was not able to sleep much and when he did, he had nightmares of never seeing the twins again.

Wilson challenged Leary to not give up. He assured him that Father to Father would do everything possible to help reunite him with his children if he could commit to doing the hard work ahead.

With Wilson’s guidance, Leary enrolled in training at Trident Technical College to learn skills that would position him for higher-wage job opportunities. In anticipation of future visitation with his children, he found a larger apartment that would accommodate the children. He completed the Father to Father’s Parenting and Co-Parenting, Healthy Relationships and Economic Stability components. He even registered to vote for the first time in his life. Finally, Leary felt ready to prepare for his day in court to request visitation.

Leary learned the required paperwork to be completed to request a hearing, the proper way to address a judge, and how to pick the appropriate attire for a hearing. He prepared a statement for the judge about all the work he had done and his desire to be a responsible father to his children.

Father to Father staff helped Leary select clothes from its donated clothes closet. Wilson wrote an affidavit of support for Leary and accompanied him on the day of his hearing. Nervous and emotional, Leary presented his case. After reading his statement to the judge, he began to cry, realizing he was as close as he might ever get to seeing his children again. Wilson emphasized the effort Leary had put into becoming the dad he needed to be to the judge.

The judge asked if Wilson would agree to supervising visits with Leary and the twins at the office of Father to Father. Wilson agreed, and a temporary visitation order was put in place. In addition to supervising visits, Wilson began mediation for the parents, hoping to help them work out their differences. The effort payed off. The couple is now working toward an agreement giving Leary a more standard visitation schedule which includes unsupervised visits on weekends and some true quality time for this father and his kids.

Leary says he was fortunate to have already connected with Father to Father during one of the darkest times of his life. He continues to come by office at least once a week to check in and say hello to the staff he considers an extension of his family. Leary can often be heard saying, “You guys are never getting rid of me, I mean it.”