ATTENTION FATHERS: We are here for you during the COVID-19 outbreak. If you are in need of our services, please call us at 803-227-8800 or use FIND A PROGRAM at the bottom of our homepage. Follow us on Facebook for our most current information and resources. For your safety and the safety of others, please follow the federal and state health and safety guidelines including hand-washing and social distancing. 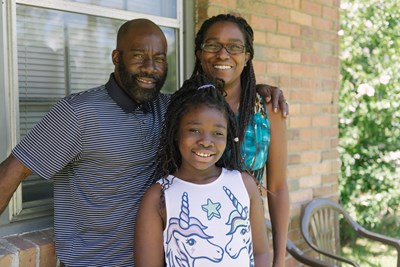 When a child is born out of wedlock, custody is automatically given to the mother. The father must either marry the mother or risk being denied parental rights. The father can be barred from visitation and any decisions concerning the child’s health and well-being. This was the case for Larry Mitchell and his daughter Larica.

From the time Larica was born in Wilmington NC, the relationship between Mitchell and the child’s mother was a rocky one. The couple separated and Mitchell began to see less and less of his daughter. When she was five years old, Larica’s mother moved them to South Carolina, closer to relatives but farther away from Mitchell. During this time, Larica’s mom become ill and not able to take care of Larica. Temporary custody was giving to the child’s grandmother.

Larica was taken to live with her grandmother and several other relatives who all shared the same home. The environment was not the best for raising a small child. When Mitchell found out what was happening, he began to worry about his daughter’s safety. Following a series of unfortunate events, Mitchell moved to South Carolina to be closer to Larica and obtain custody of her.

Mitchell began contacting local community organizations and state agencies to learn how he could get his daughter back. As a noncustodial father, he kept running into walls for almost two years, all the while being concerned about his daughter’s safety. Mitchell was feeling defeated when a friend suggested he talk to someone at Midlands Fatherhood Coalition.

After learning about the programs and the peer support he could gain, he enrolled.

Mitchell was an active participant in the weekly group sessions, even after they shifted to virtual discussions at the start of the pandemic. While he was learning how to be a good dad, his case manager was busy trying to find the means to reunite Mitchell and Larica.

Working with SC Department of Children’s Advocacy, SC Department of Social Services and the family court system, and after many discussions, meetings and screenings Mitchell was granted temporary custody of Larica.

Laurica, now a rising third grader, lives with her dad and his wife Monique, who was instrumental in supporting Mitchell every day of his long journey to getting his daughter back. While Mitchell still has more steps in the process before gaining full legal custody, he and Monique are committed to surrounding Laurica with a nurturing family, a home filled with love and a future they can all share.

Pictured above: Larry, his daughter Larica and wife Monique