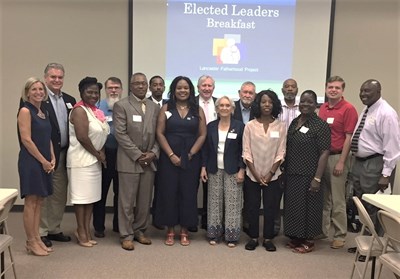 Since mid-September, the Center and all affiliated fatherhood organizations across the state have hosted one or more Elected Leaders Breakfasts to thank city, county and state elected officials for their sustaining support of fathers and fatherhood programs.

The agenda for each breakfast included a brief overview of local and statewide impacts for fathers, children and communities and illustrated positive annual outcomes achieved locally in 2018 and the expansion of the fatherhood initiative since its inception in 2002. Attendees also heard the personal fatherhood experience of a current or past program participant.

A total of 12 early-morning events have been held to date. The final breakfast was held October 30th and hosted by Man 2 Man Fatherhood Initiative, to thank elected leaders of the Pee Dee region.